I am amazed at how those eyes look at me with such expectation and hope. 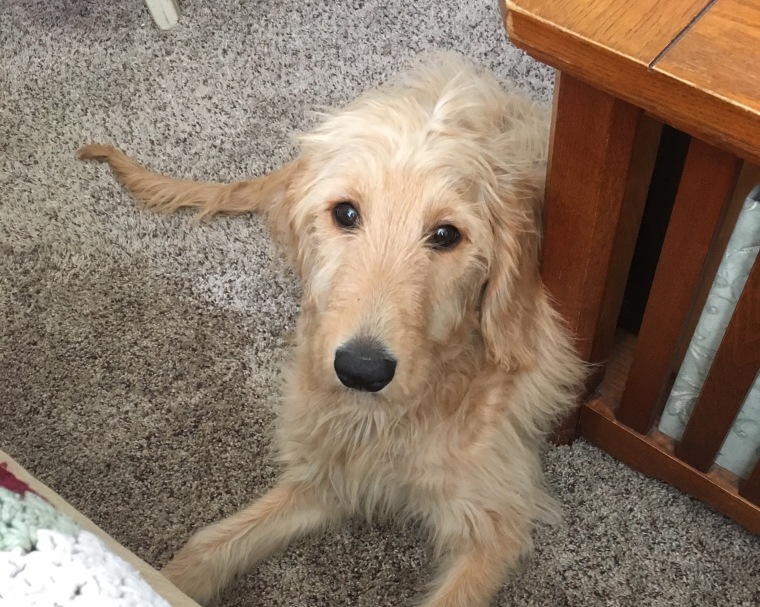 The  goal this week was trying to get Honey to loook me in the eye instead of watching my hands all the time. When we are outside and she wants frisbee to fly, it seems all she cares to do is watch hands. So after three  days of seeking eye contact, I was pleasantly rewarded with  this face as I took a sit down on the sofa.

Those eyes are the window to a different World.

We have always put human words into the mouths or actions of our pets. The most vocal per we had was a collie named Dolly. I’ll never forget one Saturday a few years back. We came home late in the afternoon after spending the day with the in-laws. Dolly came out from her hiding space greeted us on the front porch. When I asked her if Lennea had stopped by that day,  her response was a very audible,  I don’t know. Then she growled or grumbled something else I didn’t quite get. We thought it was something like you didn’t tell me she was coming. She seem to stock off like a teenager she left.  Darly always had stories to tell us if we left and came back and someone had been there to visit. Some people that didn’t know her thought she was growling at them.

Figuring out what is on Honeys mind hasn’t quite come easy yet. Most of our thinking lately is guessing her potty needs. Until we trust her “ask” which we hope is ringing the bells, we keep jumping to a wrong conclusion about her speak. Eventually we’ll know her language as well as she knows ours. Eventually…

Those eyes are deep reflective pools of devotion.

We have had free puppies, cheap puppies, a rescue dog and expensive badly bred mitts, but this is the first puppy that chose me. That doesn’t mean devotion cannot be bought. It took us nearly two years to earn the devotion of a rescue dog. We found out he loved bacon. He would do any trick in the books for bacon. Now isn’t that devotion too? ﻿

I am amazed at how those eyes look at me with such expectation and hope. ﻿

This little girl however just seems to anticipate learning something new. I am patiently awaiting my hearing ribs so that we can get back into a more vigorous training routine. I tire much to quickly and the simple commands are getting somewhat old. But puppy-hood requires mastering the basics. So for now Homey will just have to keep looking deeply into my eyes and await the next new game!