The daily surprise of RP

Everyone loves surprises, right? Well if you are talking about birthdays or gifts of course. If you are considering accidents and natural disasters NO!

Living with retinitis pigmentosa involves an element of surprise that for the most part includes chaos and a lot of spilled milk!  The first body parts to suffer are the toes and the head. Unless the person with RP wears  steel- toe boots there’s a sure factor that there will be some broken toes.

The funniest broken toe problem that I had was when I grabbed to left shoes to wear at church and didn’t check them until church. On top of that we were headed to take our eight year old to camp after that. So it was a Kmart stop on the way to Des Moines for a pair of flip-flops so that little toe could be free to be fat as it pleased! I remember walking through Kmart barefooted and wondering if they would kick us out!

RP loves foreheads, faces and noses. The greetings to those unsuspecting places can occur daily when one is tired. The not so funniest moment for me was when the teeter totter kissed me right between the eyes!  The whack could be heard throughout the whole acreage.  I had picked up a snake and was going to scarce my husband with it when the end of the see-saw bit me pretty hard. I flew back and landed on my back knocking the breath out of me. Should have been on video. We could have won with that one!  I broke my nose that time.

Kitchen cabinets should roll up like roll-top desks. Who ever decided hinges were a universal cabinet feature did not have RP.  Every time we moved to a new house I learned by the school of hard-knocks about the cabinet doors. When will we ever learn to shut those doors right away?  If you have RP and live with someone that does not-the kitchen can be a war-zone of dishwasher doors and such. I have a permanent dent in one shin from the dishwasher door.  Uffda!

I use to claim that I never broke any bones. Well it just wasn’t as noticeable. The toe or the nose doesn’t get a cast for your friends to sign. My sister broke her arm going down the slide as a child. I remember helping her get dressed. That was the era of girls shirts that buttoned in back. Really we had to help each other before the casted arm. Not sure why I remember it especially as a casted arm thing. ﻿

My grandmother was the first family member to have the degenerative eyesight. I don’t remember that she ever broke anything until her age related osteoporosis began to affect her life.  However I have an uncle with the disease that broke his leg during his career from a stair step fall. It was a pretty bad break.  The story helped me to be quite cautious of stairways. His hanging back two steps behind other walking companions has kept him from further accidents. He has not adopted a trusty walking-cane yet. Never understood why.

My father also inherited the disease. His numerous broken bones began quite early in his twenties. But his cowboy behavior was the beginning of many woes. The more dangerous approach for him has been using a cane, a GPS device and walking in an old community with various pitfalls and oddball curbs. His favorite saying is “Concrete doesn’t give!” (Meaning budge, move, or dent.) Bones are no match for concrete. The hard cement wins every time.  We are all a little glad his GPS will not hold a charge anymore. The hospital doesn’t need anymore of his hard earned money.

So how did this rib-thing happen anyhow? I was headed back to bed when the doggie gate I had placed in front of the door greeted me and the rug under my left foot slipped backwards. My ribs hit the gate with full hug force.  The blow took away my breathe and the rest is history that I don’t want to repeat. Needless to say, I have already planned to give the gates away. My memory doesn’t serve me any better than my eyesight, so tripping triumphs can’t exist in my home anymore!

The puppy that caused me to think that I needed the gates in the first place has been spending more time outdoors. She may have learned something about compassion from the whole experience. Gentle, and sit NEXT to me are now part of our vocabulary. 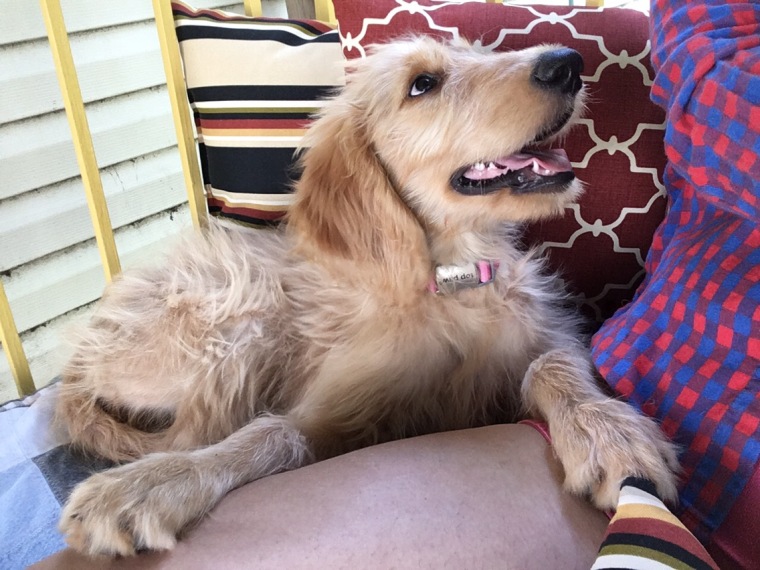 Those eyes! Usually what people say when looking at a gorgeous baby. Or blue eyes that are deep pools of water. Well, for those of us with RP those eyes are sometimes not very helpful. So getting a dog that will truly be a “watch” dog is a great goal of mine. Teaching “those eyes” to be my eyes might just break me-literally!  I sure hope we can learn from our mistakes and keep my home a safe-zone from now on.