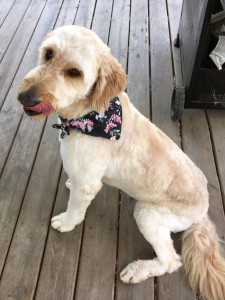 So after all that training-ha! This highly alert jumping bean tries to turn everyone into fainting goats with her not so delicate response to most noises. We decided the best dogs grow u.p around little kids. Or come from the rescue shelter with a second chance lease on life.

Today, I just carried my good girl down three steps to go potty. They I promised to dispose of the bad stuff just to get her to go in an area that she finally-after two years of yelling- has learned is off limits potty area. Well, she felt bad enough. So I did it. Carried her back up the three steps and let her in the house. Today we have a couch bum. 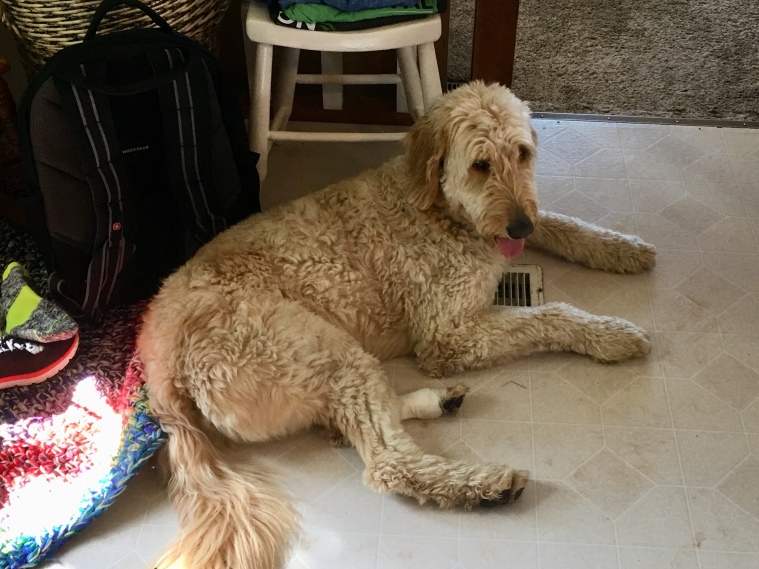 I know country living is the quiet life, but if I don’t respond with exuberant energy, why does she? Should have named her Kangaroo or springboard or trampoline. Recently met someone else that named their dog Honey an they had the same bee in the bonnet attitude in their dog. That would have been nice to know two years earlier. .

So we are trying the underwhelming approach. Never be excised at much of any thing. Ignoring her when company comes over. That really has not works either. She still annoys to the point of exasperation. Fixation on attention makes me wonder how she developed ADHD. Then I remember that she has never chewed anything up-ever. Hmmm.

No matter what excitement there might be, we are all dull drum when it comes to handling this pickle. Taking her with should be easier. But I think we will have to get another no tug harness. The band at the park outing the other day was difficult. We just have to mny memories if our perfect “Lady” – forgetting age as ten years old at perfection.

So we left her home the other night while we went for a quick ride to gas up the goldwing. She has never followed us before, so what happened in the 45 minutes timelapse,who knows? But when we got home she was obviously distressed. So the yearly trip to the vet for vaccines go moved up a week or two. This morning her paw needed some attention as the pad’s one inch gape needed fixed.

No one has ever pickled honey but some people do add apple aodar vinegar to their tea with honey. I have yet to figure out if this thing is jut the boiling hot water There is no taste to th tea if you burn your tongue first. And there are times, when I feel at my age, my tongue is just burned too frequently with the antics of a young puppy. This morning we met another doodle at 5 years old and they told us ours would get better soon.

Sweet and sour barbecue sauce usually has both those ingredients (Honey and vinegar). Honey, vinegar, ketchup and a whole lot of turmeric makes some really great rib sauce. But this girl does not even tickle the ribs funny. Calm down pickles! Well, today she is definitely down. Just look at her giving up on life with her injuries. Two pads have obvious woulds, and another she licks at, but I cannot sense the would with my probing. We are not being lazy… just resting through the healing process.

Words sweeter than honeycomb cannot be peppered with garlic and jalapeño dills. Yet this mutt gives the same effect when she greets strangers. Should have named her Cookies, like the hot spicey barbecue sauce!

While whispering to a hyped up dog does not always work, adding a cookie or cheese stick to the senses surely does. Not long ago she actually pleased us all day and we rewarded her with a McD’s burger. That’s when we found our that she was smart enough to spit the onion and pickle out. So now we know she’ll never get poisoned. She would not even take a treat from the vet this morning. It’s like she said. “Yeah, right, I did not see those two needles, and the scissor, and the iodine. You’re a stranger, I’m not pleasing you.”

Having a not so serviceable dog makes me wonder if this energy can ever be harnessed. Her idea of anything is full bore ahead. So getting her to walk the steps WITH me has been challenging. The service harness that I put on her is something she “puts up with.” It’s not a love, like Seymour considered it. But then maybe loving her through this injury and carrying her up and down these exact stairs will get her to love being with me.

Whatever was I thinking?

And how did she ever begin to choose Pickles for a nickname? I have taken up it’s use for when she is naughty. That way I never use her name “in vain”– the trainer said only use a happy tone of vice with the dog’s real name. So Pickles is the discipline name. So far, she does not care. Either one is good for her.

I haven’t decided yet what kind of pollen our bee used for making our Honey. I am thinking hay or alfalfa because they are my wort allergy. Sweet clover honey often gets too biter. So I prefer garden flower Honey. Just the other day upon arrival home, I was playing tug of war with her upon arrival home, and a bee stung me. That’s what got me thinking about all of this.

One last story about the starts before I carry her out again for another potty break. One time when she was just a wee puppy, we went to visit our daughter at the retreat center. The stairways are long, and at that time dark. Gavin was leading the way, followed by Honey and then me, and then our daughter. Two steps into the dark and this sound greeted us, “thud, thud, thud, thump, UFF!” Honey fell down the dark stairwell. So much for her being a sight dog to help me in the dark and down stairs.

Well, these next two weeks are dedicated to healing pads. We took this opportunity to put all of the frisbees into the deck box. She will not be playing for a while. I will get some muscles carrying up and down the stairs. At least the back deck only has three steps for us to fall down or trip over cats on.