And the lost kitten and the spectacles 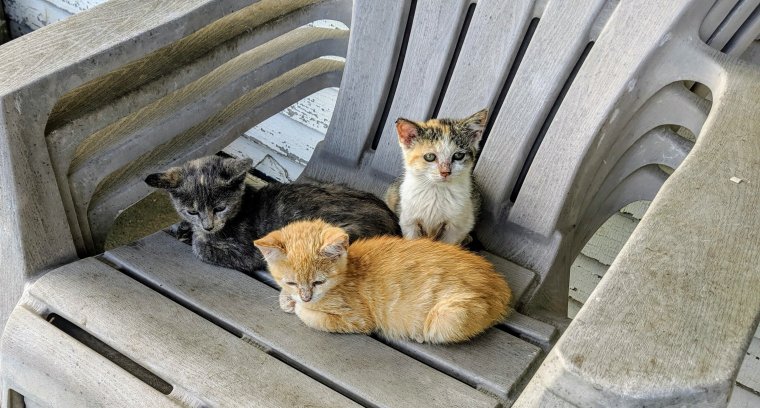 This week we have been busy finding things. Not that all were lost, some were, some were not and some just played hide-and-seek for awhile until someone clever found them out. Here is the whole story.

We recently picked five kittens from a neighbor that lived five miles to the west of us. It was just enough distance with a creek bed between that the blood line is quite different than ours. Pleasantly colorful, the kittens are a wonderful contrast to the boring black that had plagued us for the past five to eight years. Having a different color scheme we though might help me enjoy their presence a bit more.

So a few days later when one, and then two of the kittens disappeared, I was pretty sad. How could a raccoon or fox be that quick to discover my new found little treasures? This country life was getting me down. The following morning, my husband did a little investigating and found one of the the errant kittens in the deck box where all the food was kept. (The first lost one is no where to be found.). Was I ever happy to see my four little kittens all paired up at their food dishes. Yay! We will put them in a crate at night until they refuse to fit in there.

Once a week I get up before the sun does and join my husband on his route to the big city. He drops me off to play with my granddaughter all day, and them continues on his drudgery to work all day. This week she had a routine doctor well check-up and had to have a shot for her vaccination schedule. Needless to say her giggle-bug got lost in the event and she shed a few tears. And frustrating as it is sometimes, she also had a slight reaction to the shot that required a Benadryl and Tylenol dosage. So while her mama was trying to contact the doctor and fix some lunch, we went out to the swing for a moment of distraction.

While at the swing, my silly noodles got ahold of me. The leaves are beginning to drop ever so little bit and I found some rather large leaves at out feet on the lawn. So I began talking about UP and DOWN and telling the leaves to “get back up on the tree where they belong.” My little grand-daughter thought that was the funniest thing ever. She laughed so hard that she coughed up some of the phlegm that she has had from a little runny nose cold with her teething. It was the kind of laugh that can never be repeated, nor captured accurately. A day later, she was still picking up leaves and throwing them up to watch them fall down.

Over the weekend my husband also finally got after the tall lawn with the lawn mower. It had been al least two weeks or more. And with the weather that we have had, mowing grass seems to be the biggest past time this area has found to do consistently. After the mowing and a late afternoon motorcycle ride to the local state park, he discovered his glasses to be missing.

We overturned all the pillows, the blankets, the sofa cushions and were still not successful in finding the lost. Monday, Tuesday, and Wednesday passed with no sign of the runaways. What could have become of the spectacles. I felt bad for not helping him look for them, and bearded myself for not being more thoughtful. Sometimes not looking is the best way to find such things.

So this morning after the dog danced and pranced to take a walk with me, I obliged her. The weather has taken a drier turn, and the early morning moisture was more bearable for my lungs. Off we trotted to take a mile to “smell the roses” that she finds so appealing. When we arrived back home, the driveway greeted me with a glimmer of reflecting sun. The sun’s reflection is not supposed to be there, I thought. I should be brave and see what shiny thing that is. In a few more steps, my courage was rewarded with a pair of scuffed up eye glasses. Bother, I’m not sure they will be so pleasant to wear, I thought, these things have been run over a couple times. But they straightened up some when I picked them up.

One pair of eyeglasses found.

Yay! What a successful or eventful week we have had just doing ordinary things. Perhaps the week is going to shape up into being a pretty good memory. The giggle bug was probably the best find though.

I thought of the widow her found her little coin and asked all of her neighbors to celebrate with her. The parable comes form a period of time that we do not really grasp well in out understand of the culture. The last coin from her ornate veil and dowry from her wedding week, does not seem like a treasure that needed sharing with all of her friends. But if we consider that it was the last piece of pleasant memory from years earlier, and a something that would keep her from being a beggar, maybe the knowledge will help us comprehend her joy at the found object. None of the things that we found this week had that much significance to our lives. But I thought that perhaps my neighbors would still enjoy rejoicing with me over our found things.

Thanks for letting me share with you. I hope you will find something new along with your find of something lost in the next week or so. And remember to grasp the joy that comes with that find for a long enough time to add it to your gratitude list!