Recently my husband saw a mink or ferret cross the road while on his way to work. It so fascinated him that he told everyone about it. Before long like the “whisper in the ear” game, word got back to him that he had seen a parrot on his way to work. Much story telling and laughter insured as the family explained who said what and where had the story gotten mixed up. It turns out that the news had carried a story of someone’s pet parrot getting loose that winter day and sure enough Gavin had seen it on his way to work. For those of us that don’t watch a lot of television and get most of our information from the fake media of internet, there was no fake news about Gavin’s ferret. Bother what a mix up that was! Hilarious none-the-same.

While the telling of the story should include who has lost their hearing and no longer hears the right words, putting a news story with Gavin’s winters drive to work was the true mixup. Only a ferret would cross the road in the country in February in our neck of the woods. The Parrot would freeze to death around here!

Partially deaf can make for hilarious stories but can also leave one missing half the story.

And the partially blind. Some people still have driver’s licenses and see less that I do at times. That makes for scary passenger riding. I just choose not to ride with those people again. Being the one without a license has made my decision to not have to tell people about traffic, construction workers, which route to take, or follow a google-map. Driver’s that scares blind person should not be driving.

But there are other things that tell me much of the world has challenged eyesight. One is the lack of cleanliness that others might exhibit. Like failure to return glasses to the kitchen sink. Or Kleenex, napkins, or paper towels to the garbage can. Maybe I’m getting old. But that stuff bugs me. We had a puppy once that ate and choked and threw up that kind of thing. Soon I will have a grandchild crawling around. Cleanliness is a new “fighting the lack of foresight” thing for me.

The fridge and the cupboards of a blind person are all completely organized. Everything has a place. So important if you don’t want barbecue sauce on your salad. Marinade for meat just doesn’t go on salads. Funny how when the eyes don’t look so good, meat sauces and salad dressings have the same size containers. In my fridge anything for meat comes in a glass jar. Salad dressings all have to have the pop-up lid so they come out slowly.

Walking with Honey. She is more than eyes to me. She is my soon settled guide dog. Today she crossed the line into helper for me. I thought the puppy would never go away. Having a leash in hand tells her she is to help me. Of course she still tries to tug on the leash and play for a few minutes. Firm consistent commands are hard to give when a puppy is in tow and we need to flip the switch to helper.

Listening and feeling the oncoming traffic during our two mile roadway walk was such a blessing to me. My praise for her was ecstatic! While the first car came at us, and she did her thing well, the second vehicle came from behind. Harder to hear for me. But my trustee Honey heard, felt and saw it in plenty of time to react and nudge my knee, then pull me towards the ditch. 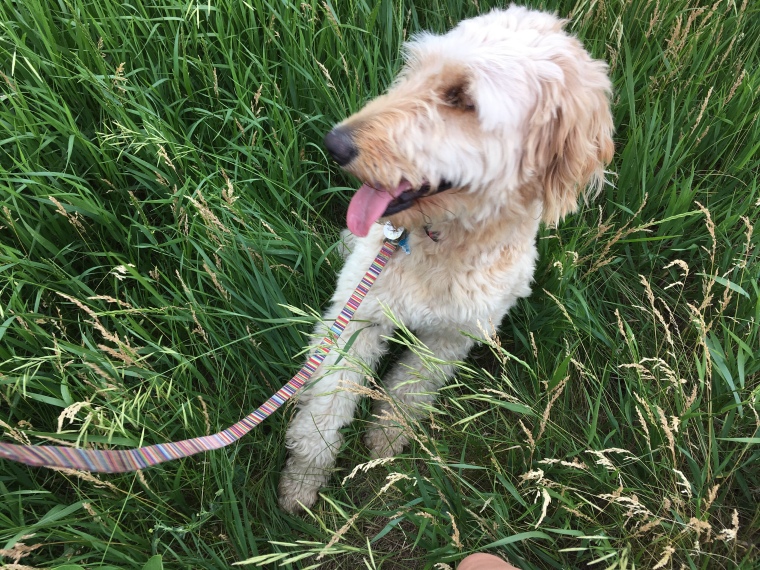 Today it is very windy. Flag day in our country. And the wind makes it a not so smart day to do the roadway walk. So instead we did some simple heel then help training right in the yard. First off, she followed my walking. Then I followed her. Trust.

Recently, my mother and I have renewed our interest in Psalm 119. Her study and mine were completely different, yet we had so much to teach each other about what we were learning. Verse 37 came to mind when I though of Honey and I leaning each other’s ways. “Turn my eyes away from all the worldly, meaningless that’s that distract me and let your priorities be mine, And restore me with renewed energy in Your ways.” This is a paraphrase of the amplified version.

Having a friend that is “more than eyes” is pretty amazing. Trusting her to take me places and to shut my eyes and let her guide me is not easy. What if she decided to play at the last second and I should fall? Well, it can’t be as bad as the broken rib, broken nose or a sprained ligament, so here we go.